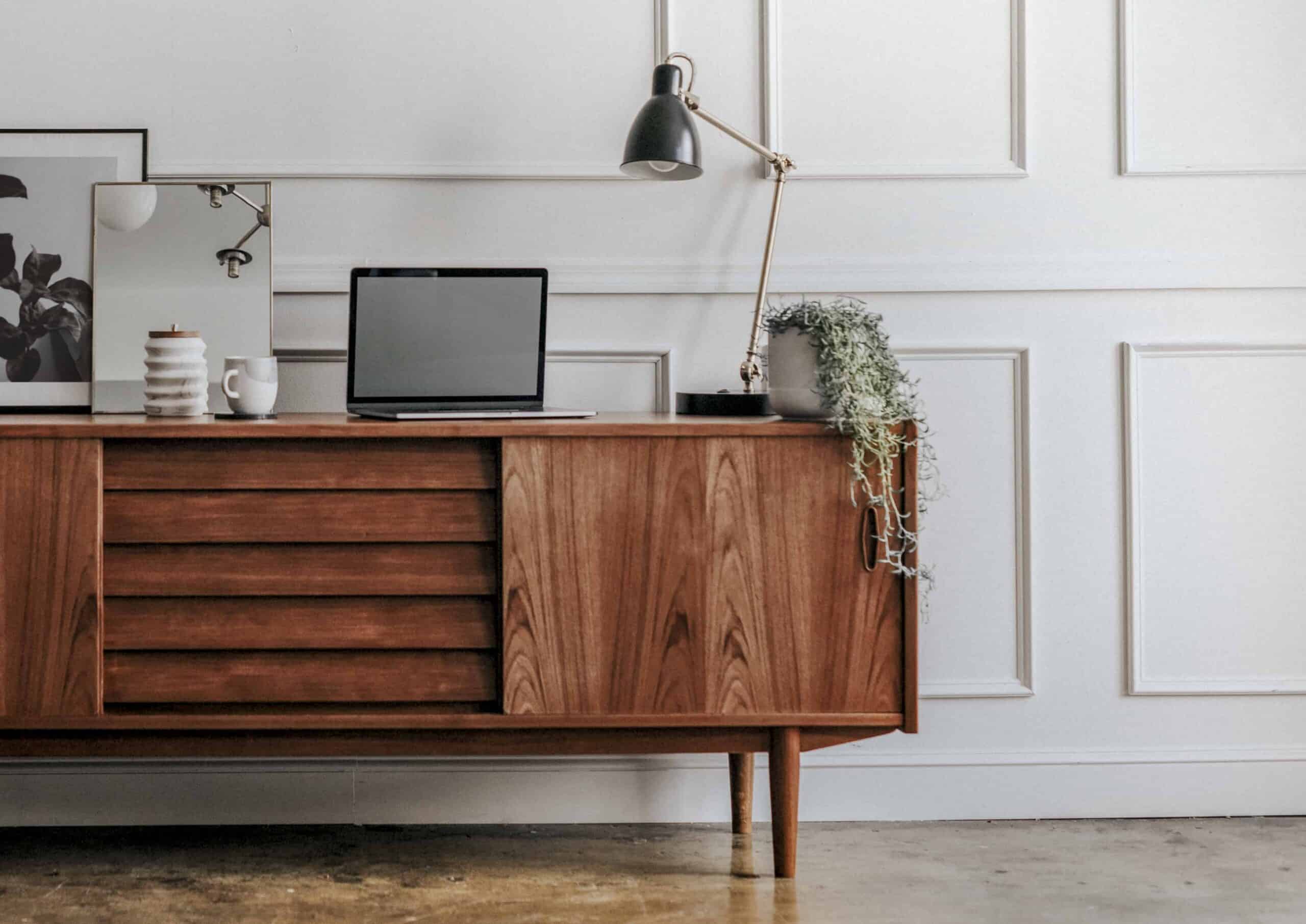 The Brady Bunch. Rockford Files. Columbo. Anybody else like old shows? Or if you want to go back a little further, I Love Lucy, Perry Mason, Andy Griffith. (I count my parenting skills a success when my kids ask to watch Andy Griffith.)

Do you ever look past the show and admire the interior design? Surely you can picture the green shag carpet, the brown paneled walls and the gold accents. So when you think of the Mid Century style of decorating, maybe you think, “Um, no. I am NOT an old cat lady with brown and yellow afghans on the couch, but thanks.”

Or maybe you’ve jumped on the Mid Century bandwagon of the past several years and have embraced that unique style of home décor. But WHAT IS “that style” of décor? Because I don’t see too many people running out to get earth-tone shag carpet or lining their walls with brown paneling.

What Is the Definition of Mid Century Modern Style Home Design?

Mid Century era is from 1930s – 1960s, the middle of the 20th century (thus its name). There were a lot of changes in the world during this time period. We went from the beginning of the Great Depression, through World War II, into the Baby Boomer and Rock and Roll era and ended with landing on the moon. No, Mid Century Modern decor did not stay exactly the same through these four decades, but the principals of home décor did.

The “Modern” part of the style references the timeless appeal of the interior design styles that continue into the 21st century. This brings in the sleekness and no-frills attitude that you see in Modern décor. Midcentury Modern adds simplicity and historical together to form a timeless style of decorating.

What Furniture Designers to Know of the Mid Century Modern Style Era?

You can certainly furnish your home with vintage pieces that are not designer brands. And since the style is so popular, you can even buy new furniture in the Mid Century Modern style.

But when looking for a piece of authentic Mid Century Modern furniture, here are a few names to keep in mind. You might score an amazing deal on the real deal!

Mid Century furniture is very “clean” looking…think abrupt, unbroken edges. It can be straight; it can be curved. But it’s straight forward and un-frilly. 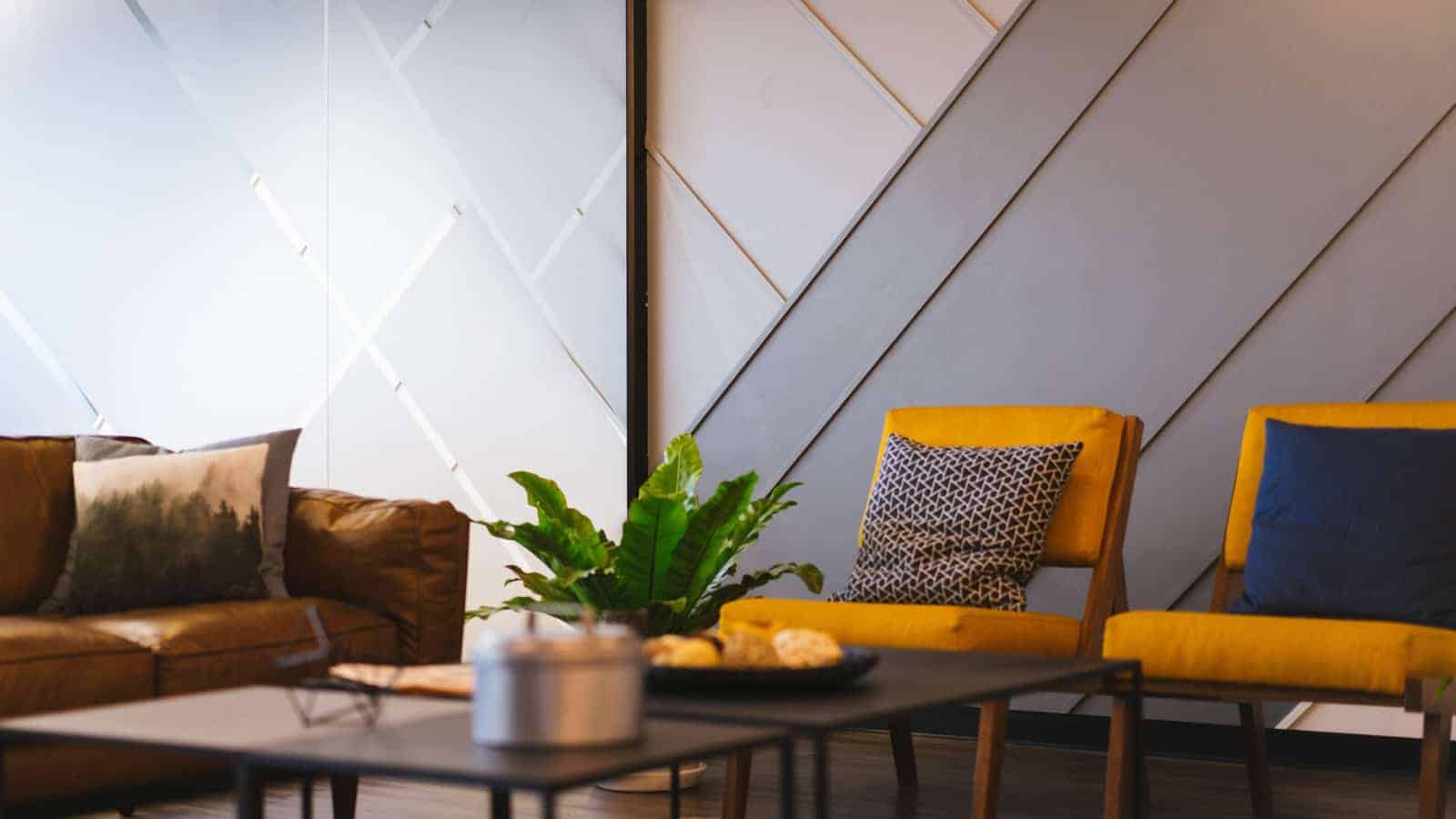 Couches will not be overstuffed. They tend to have a firm seat and back, creating a square (or rectangle) angle at the arms, seat and back. 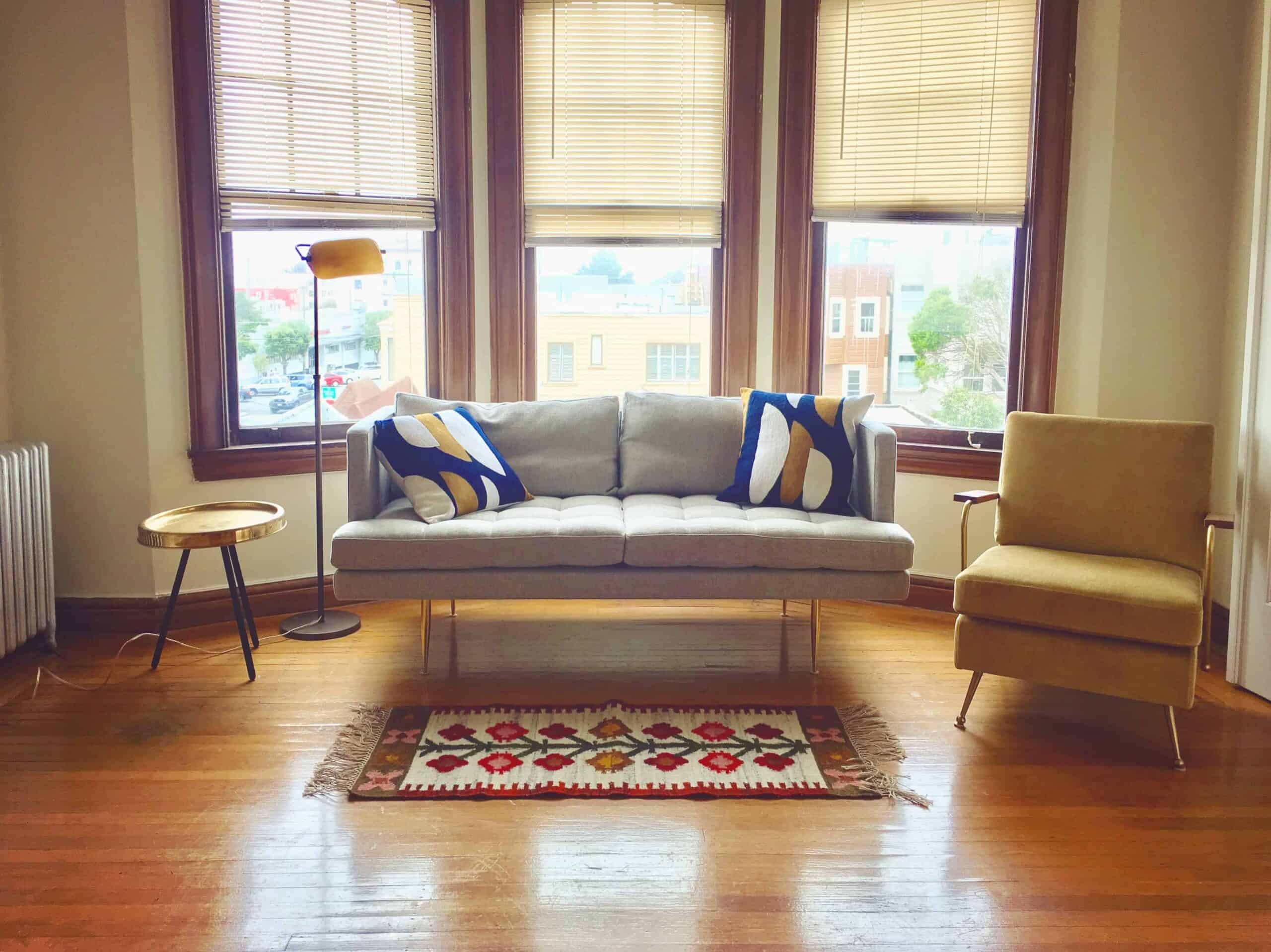 Using light colored, natural woods like pine, maple or birch furniture is often described as having blonde wood, a very light color wood or wood veneer finish in a light yellow-ish color. It’s easy to find vintage furniture in good condition to add to your Mid Century Modern home decor since the style is so popular right now. 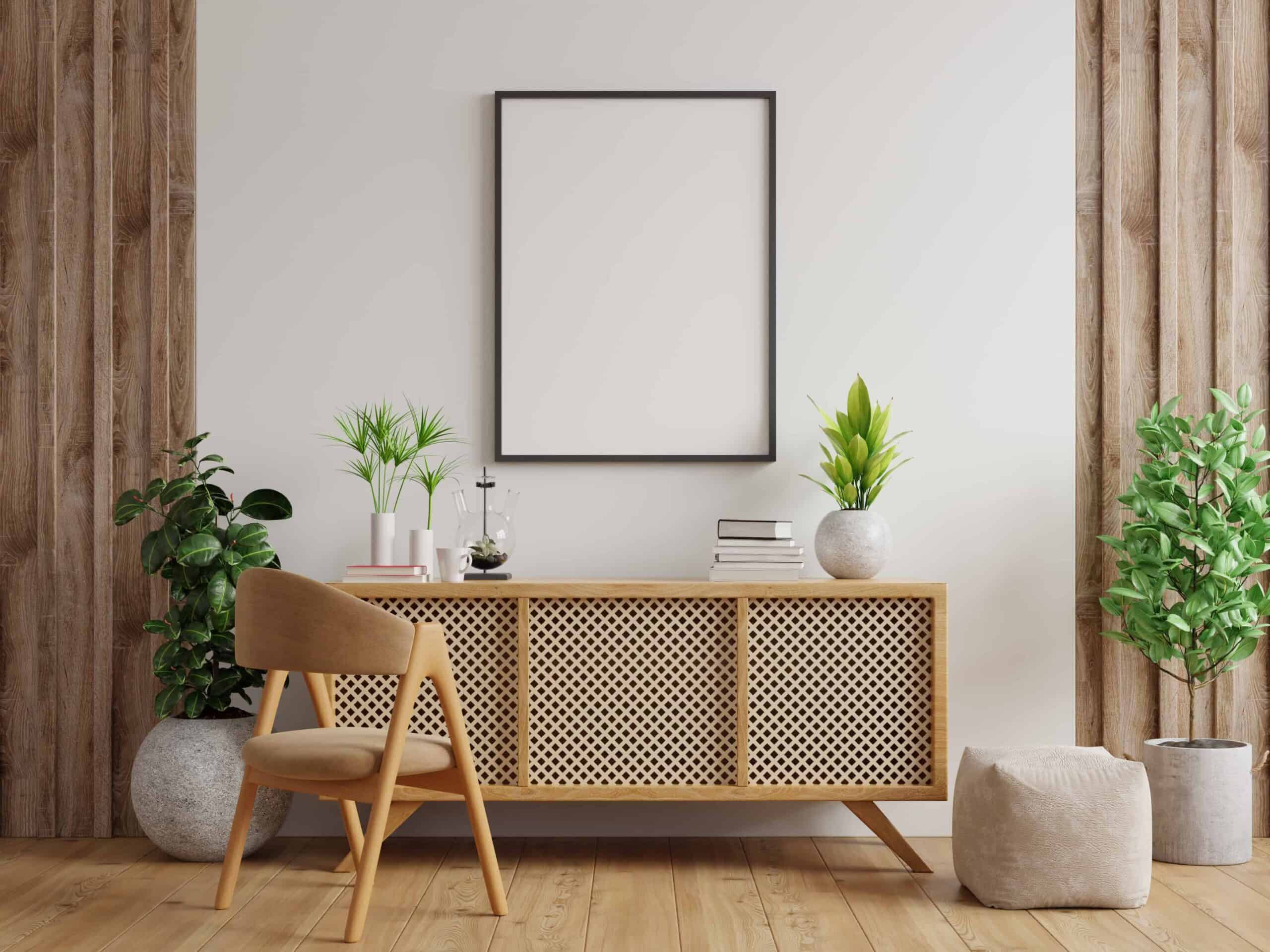 Scandinavian or Danish Modern styles fit very well with the Mid Century style. These designs are known for they’re simplicity and minimalist decorating. 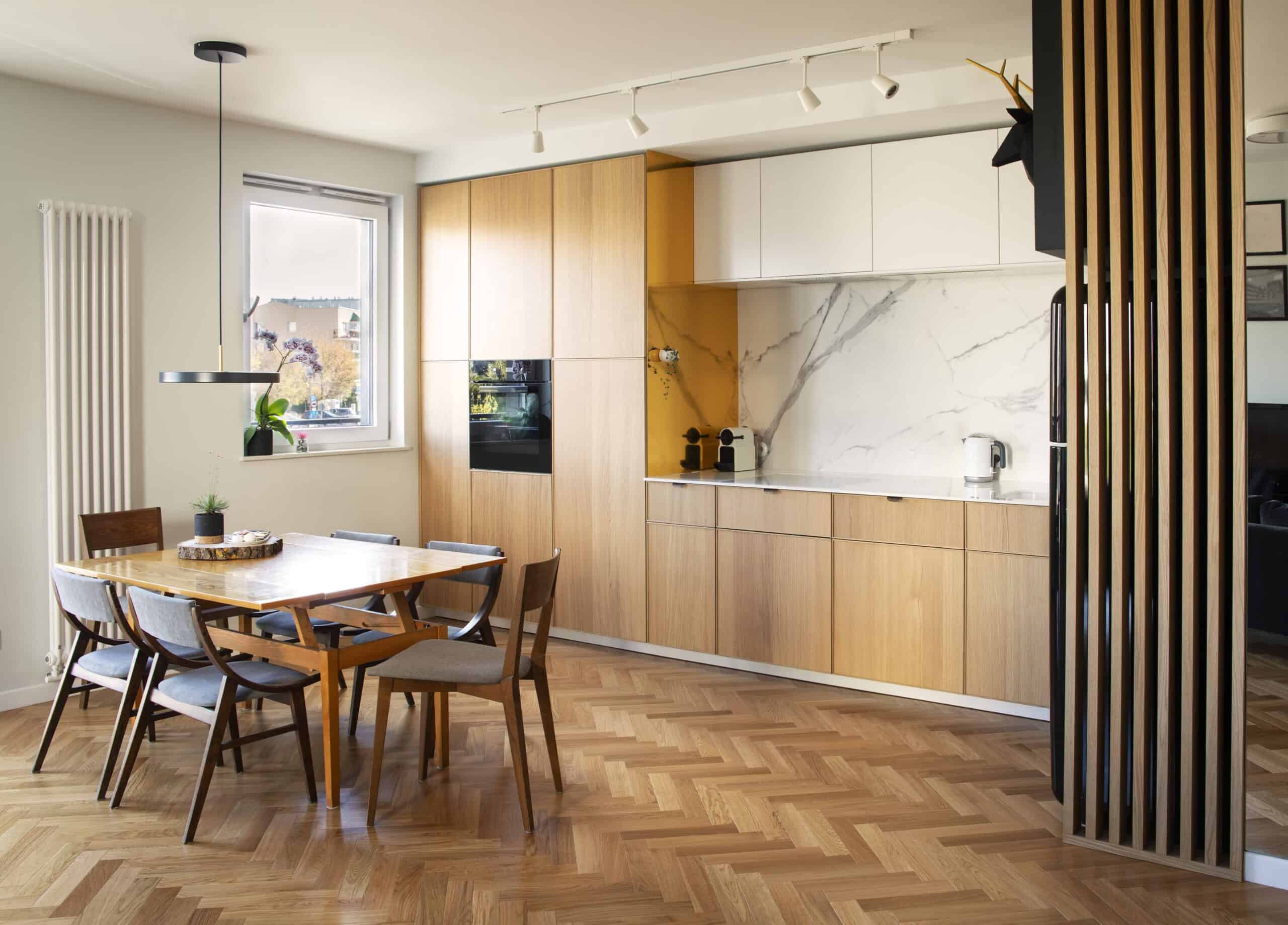 Now, while some Mid Century or Retro Mid Century styles include pops of bright colors such as red, most of Mid Century is more toned down. Think subdued green, bits of yellow gold and deep teal. Just don’t overdue it. Your statement pieces should be a pop, not an explosion. 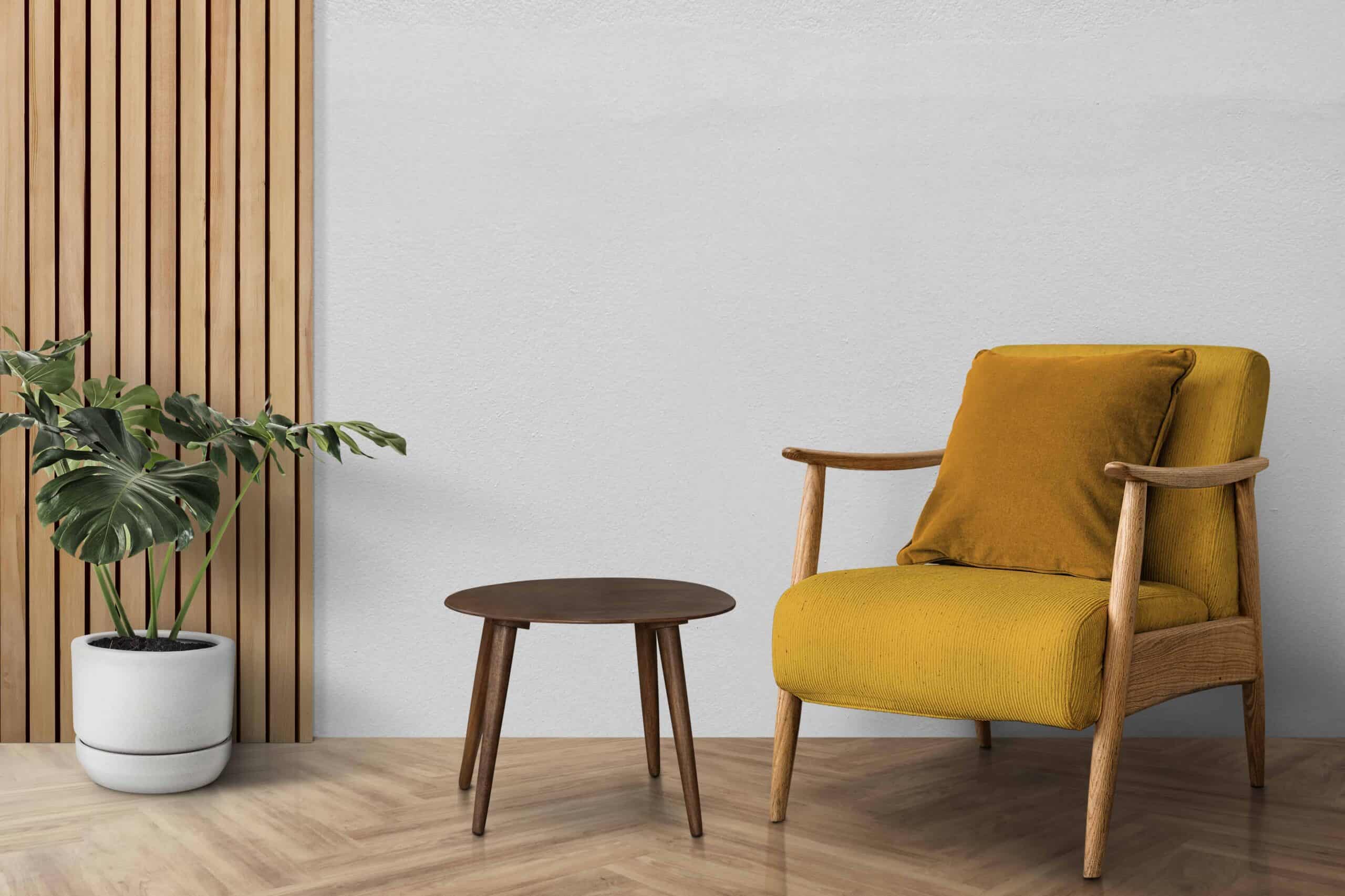 Yes, there may be pillows on a couch and books on a shelf, but everything is pretty limited. A small and neat stack of books, not books overflowing the shelf. A big plant, but not every bit of space filled with plant babies. This style is not about collections (unless they’re records). It’s more about making a statement with a few quality items. 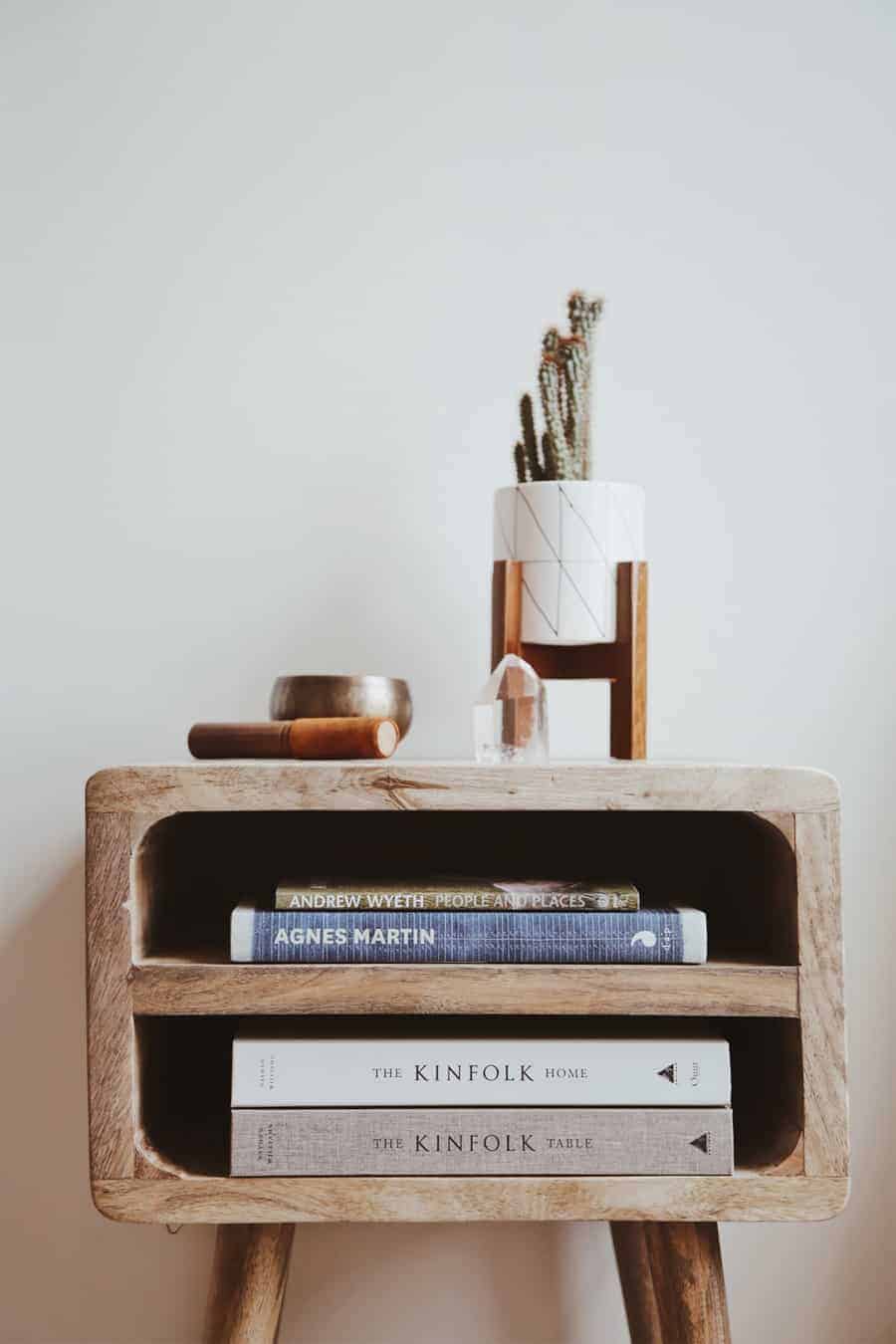 Glass top coffee table, gold metal bar cart, gold cabinet hardware. Gold (not used in vast quantities) is a sure-fire way to get Mid Century character. Even new pieces in gold and glass will fit in to this vintage style home. 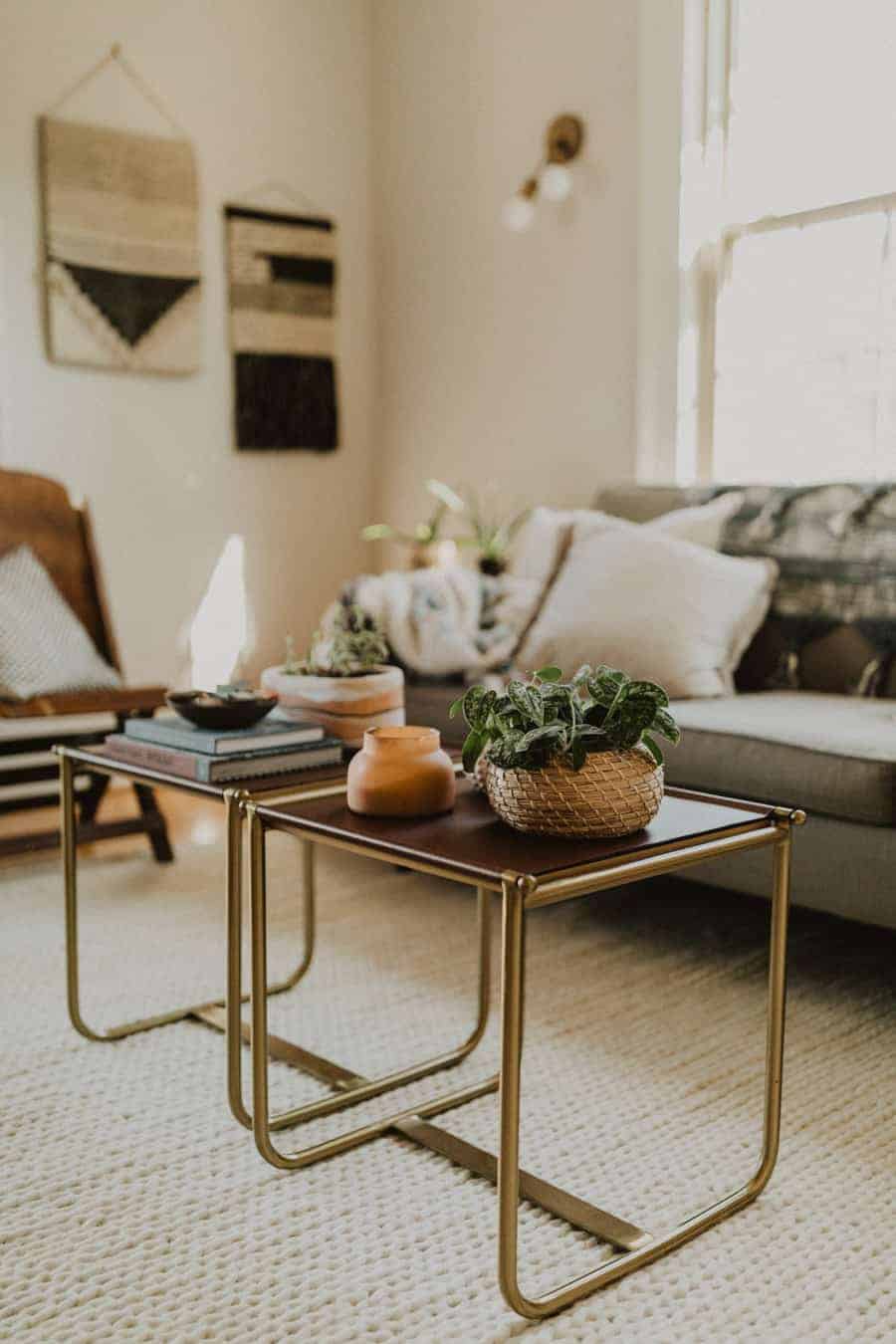 Natural materials brought inside are essential to Mid Century Modern style. Bamboo and rattan are favorites of the Mid Century style. They will be finished in a wood tone and not usually painted. A cluster of pampas grass in a floor vase is also popular. 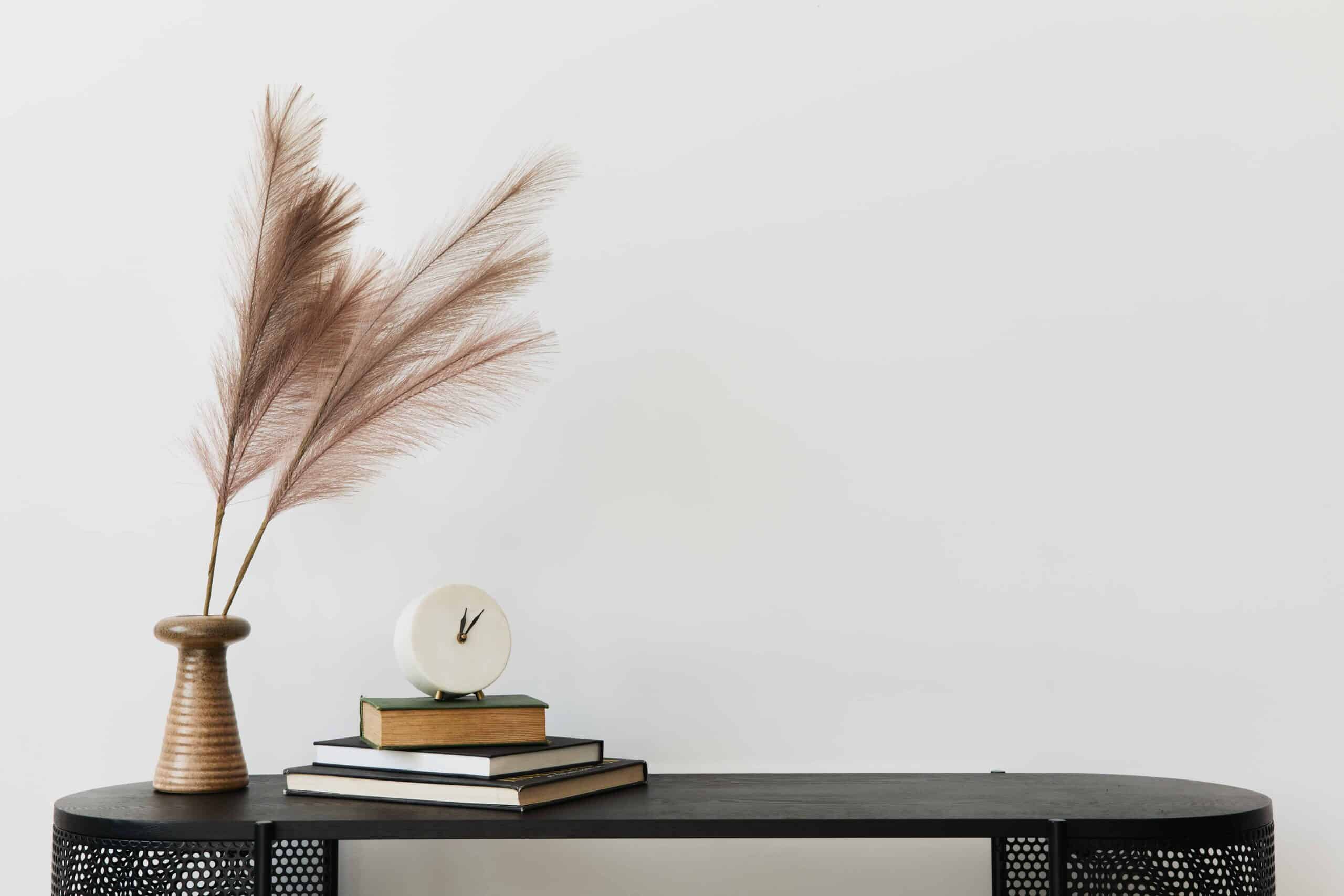 Towards the 1950s – 60s, the space race took off and greatly influenced light fixtures of the Midcentury design. This was called the Atomic Age and many light fixtures were metal works of art in crazy angles and space age style.

The most well know shape of this era seems to be the “boomerang” found printed on many countertops and kitchen tables. Even the shape of coffee tables mimicked this boomerang. Other geometric shapes of the era were the triangle and pyramid.

Shelving units on a wall, floor plans and furniture is all about creating visual openness. It seeks an uncluttered effect and space. Often space is created under a piece of furniture with simple legs so you can see under it. No clunky furniture sitting directly on the floor. 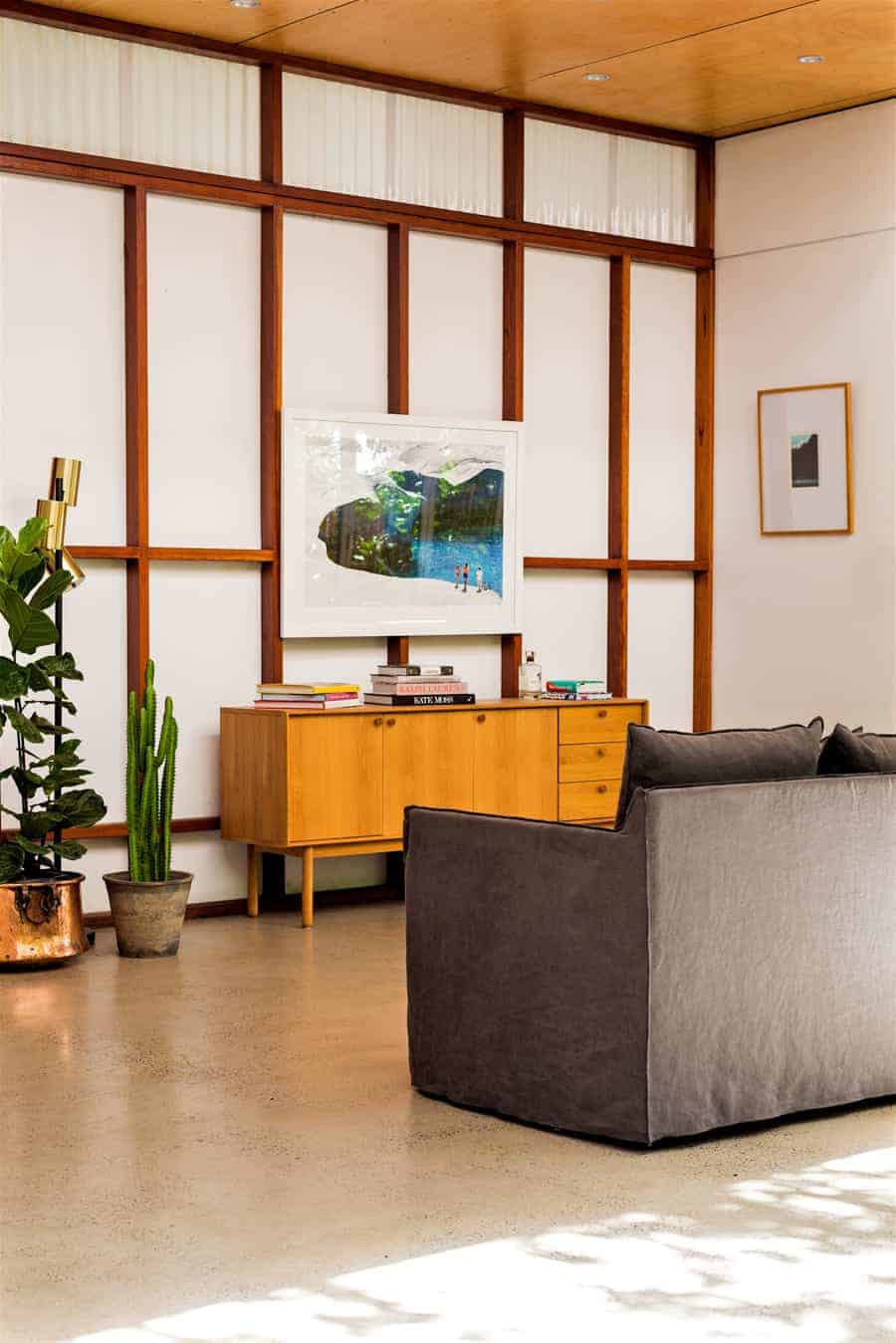 Mid Century Modern art is very simple in that it is color blocks or black and white. Detailed landscapes are not a part of this style. It is a punch of simplicity and a true lesson on “less is more.” 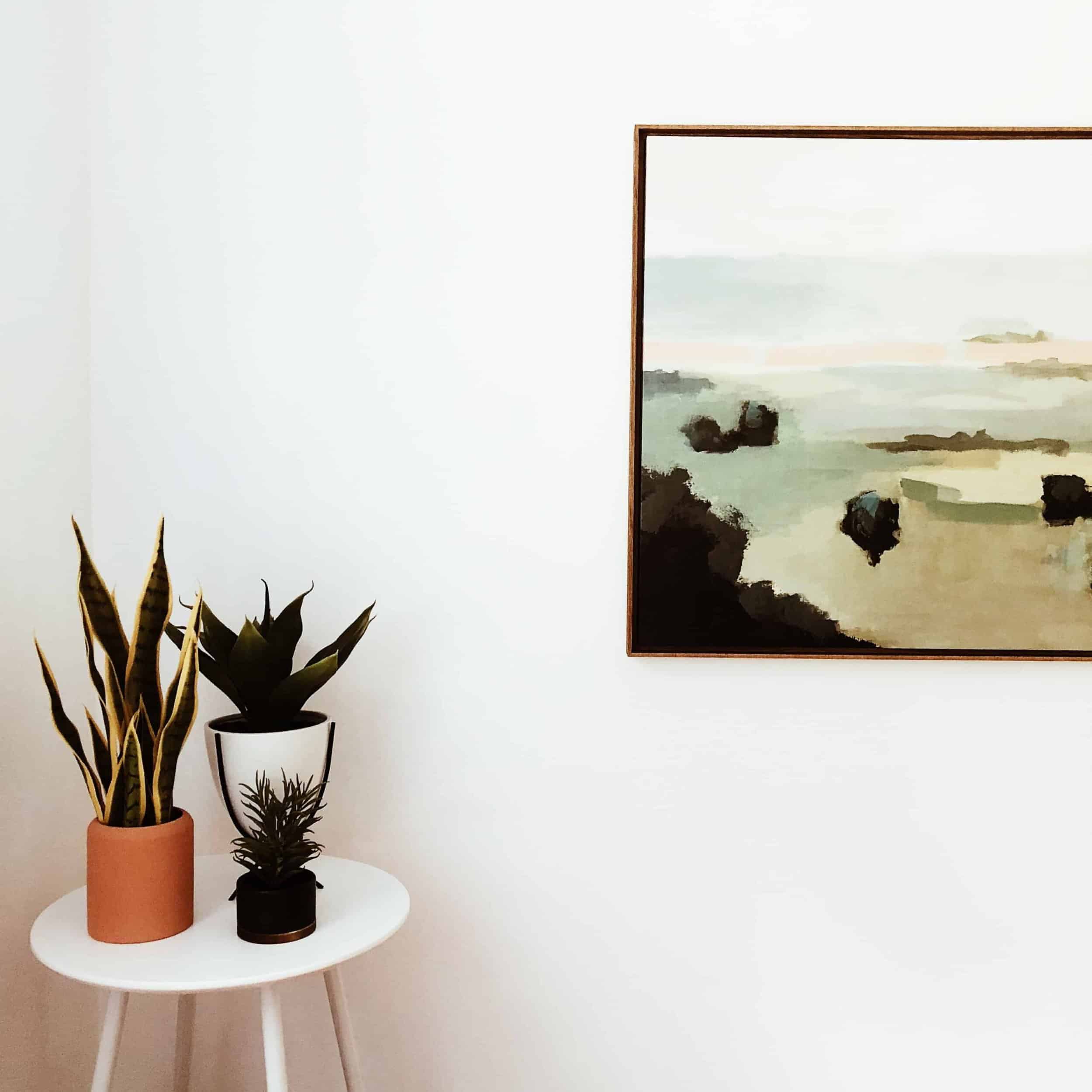 Probably also from the space race era of reaching towards outer space, the starburst design shows up a log in Mid Century Modern interior design. Metal designs on the wall, candle sconces, mirrors and clocks are commonly in a sun or starburst pattern. 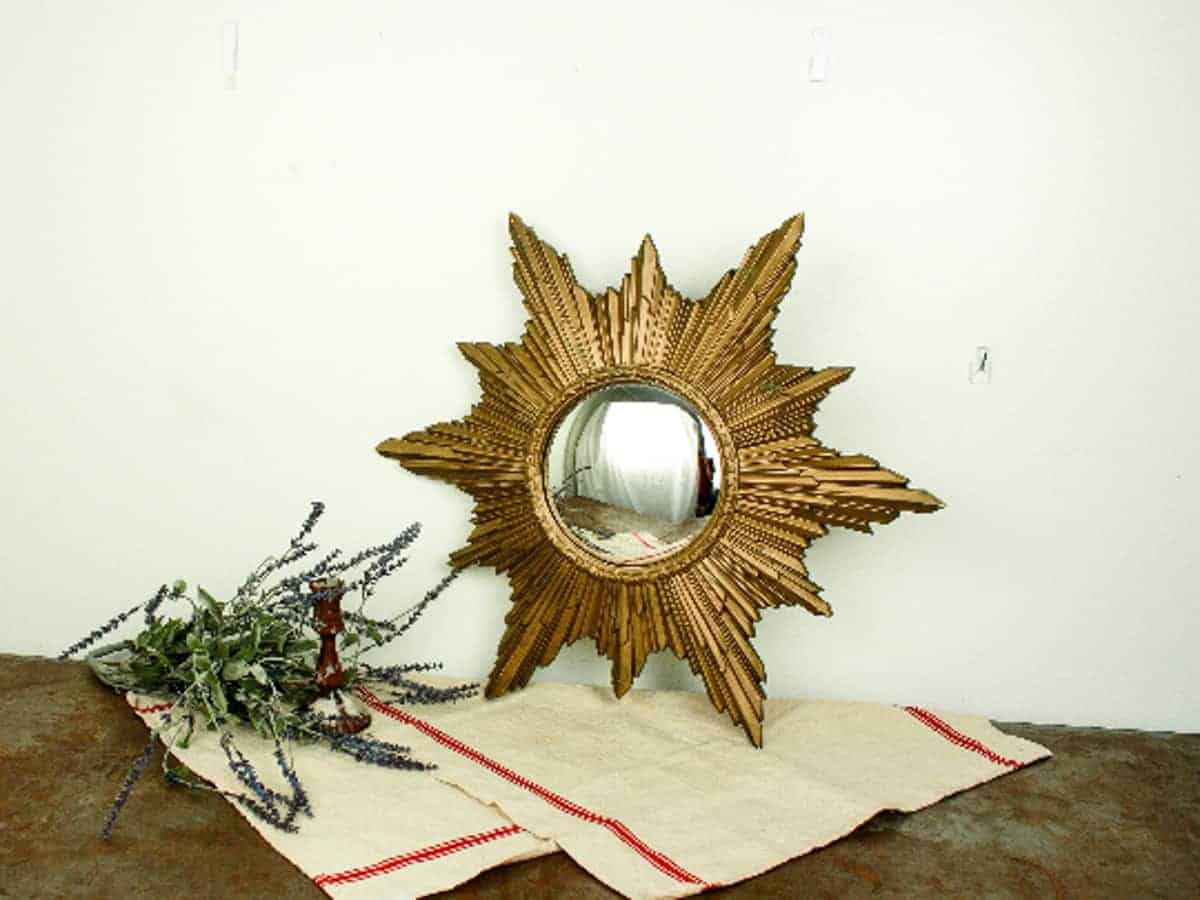 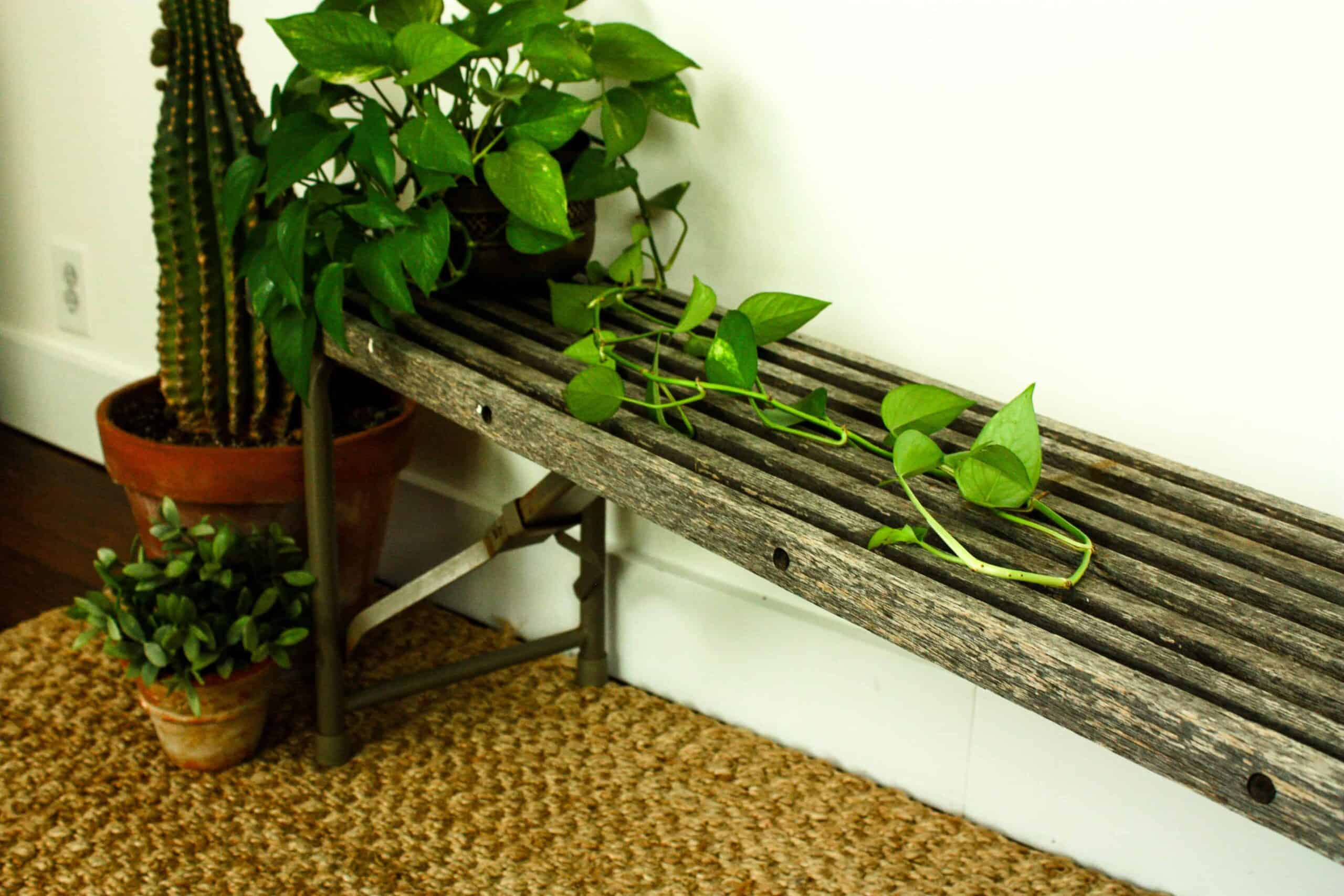 The simplicity of furniture design did not seem to transfer to curtains. While still in simple graphic patterns, curtains were a burst of busyness. Various geometric forms and colors crowded together. Starburst patterns were also a favorite fabric choice. 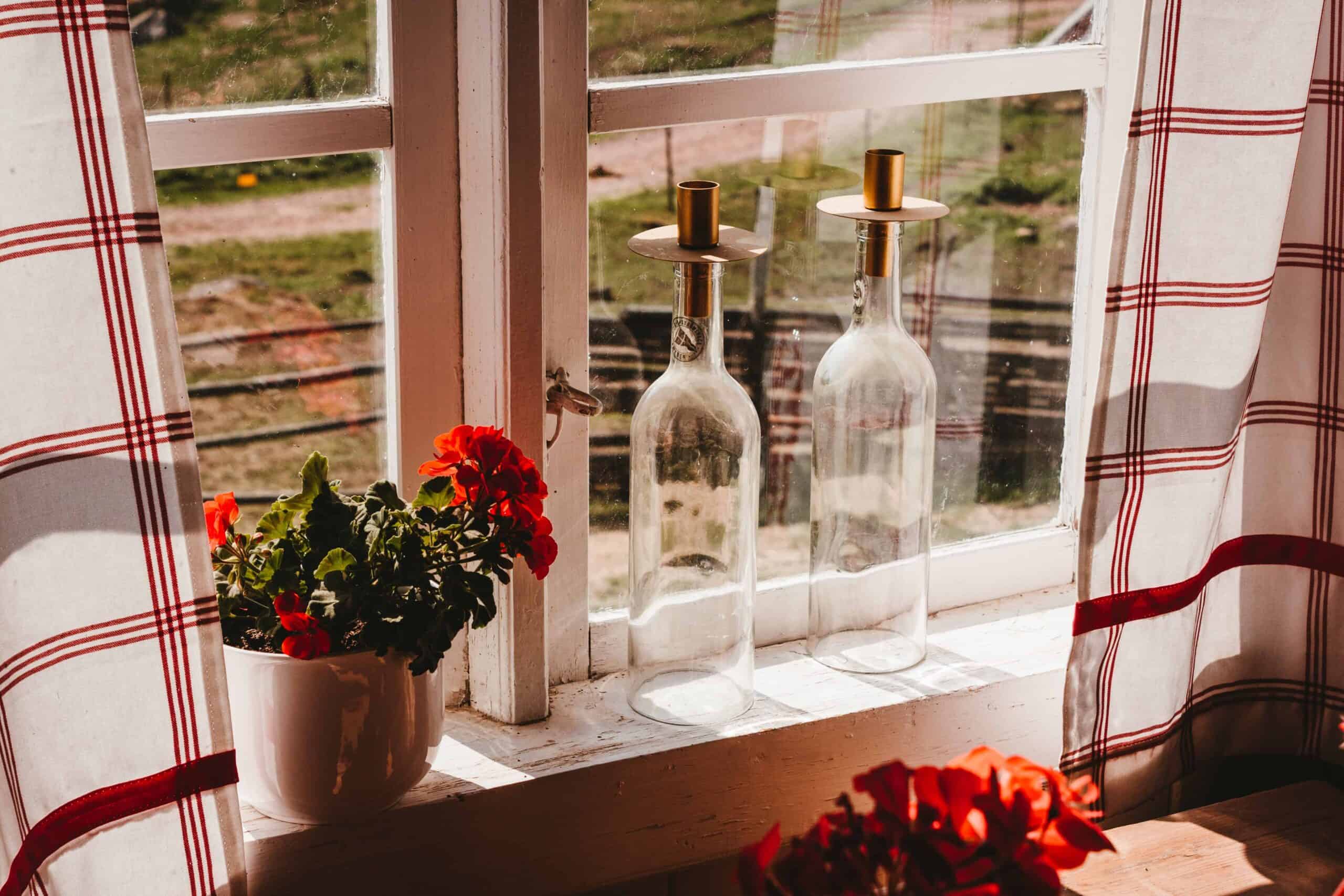 Retro pink, you know the one. It shows up often in Mid Century Modern homes. All the same bright shade, this pink would be on a couch, wall paint, kitchen cabinet or even just a recipe box. 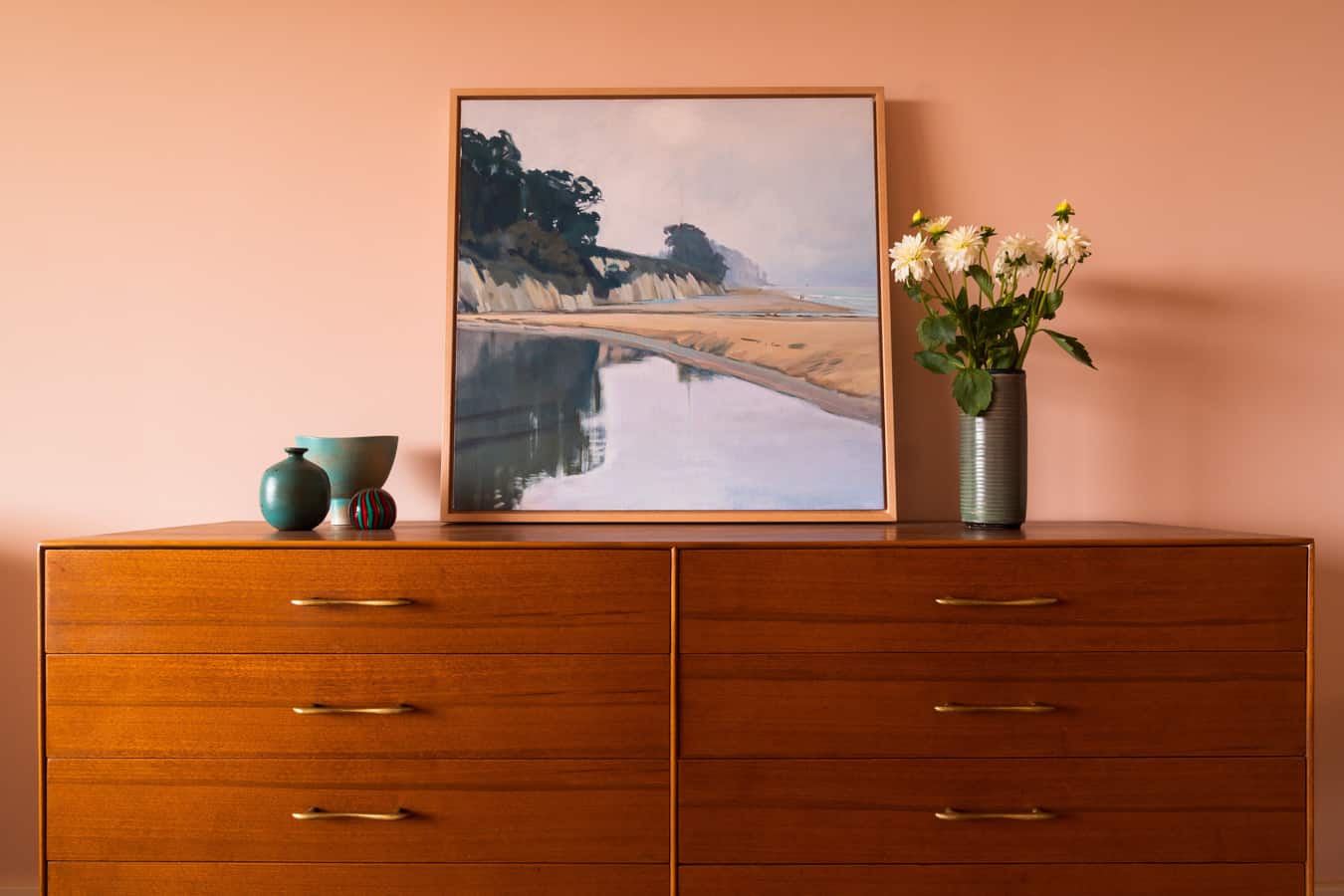 Cabinet and furniture hardware is simple lines or a classic curved handle with straight edges. The exception is door pulls that have a back plate in a starburst pattern, yet another way to add this geometric design.

Mid Century Modern is full of chrome finishes. Faucets, towel bars and even chrome edging on a countertop adds a splash of bright metal often.

Though I just talked about chrome finishes, Mid Century Modern home décor actually loves all kinds of metals, and they mix them together in a room. Brass candlesticks, black painted metal legs and chrome hardware can all be found in the same room.

Brick fireplaces are often painted white or light colors, though dark gray brick can also give a Mid Century Modern vibe. If you’re fortunate to have a natural (limestone color) fireplace, you immediately have a punch of Mid Century style in your home. 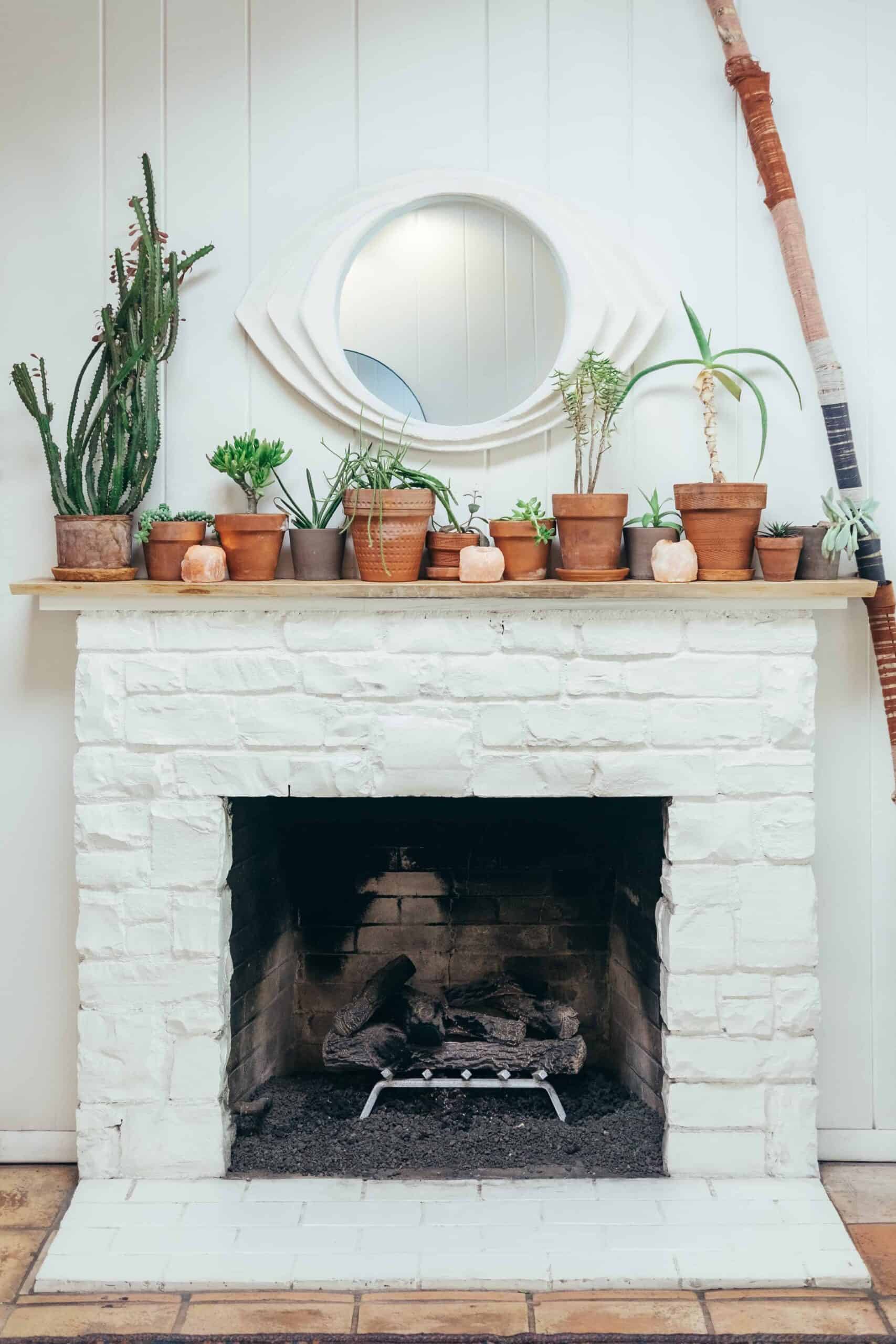 21.   Large Windows with No Curtains

Mid Century style homes love large windows, even a wall of windows, with no curtains. This allows the outside to come in as part of the home décor, not to mention all the natural light it brings in.

This is a great way to add Mid Century Modern style but to have a collection of vintage records. This doubles as décor AND lifestyle. An authentic Mid Century console record player completes the authentic vintage style. 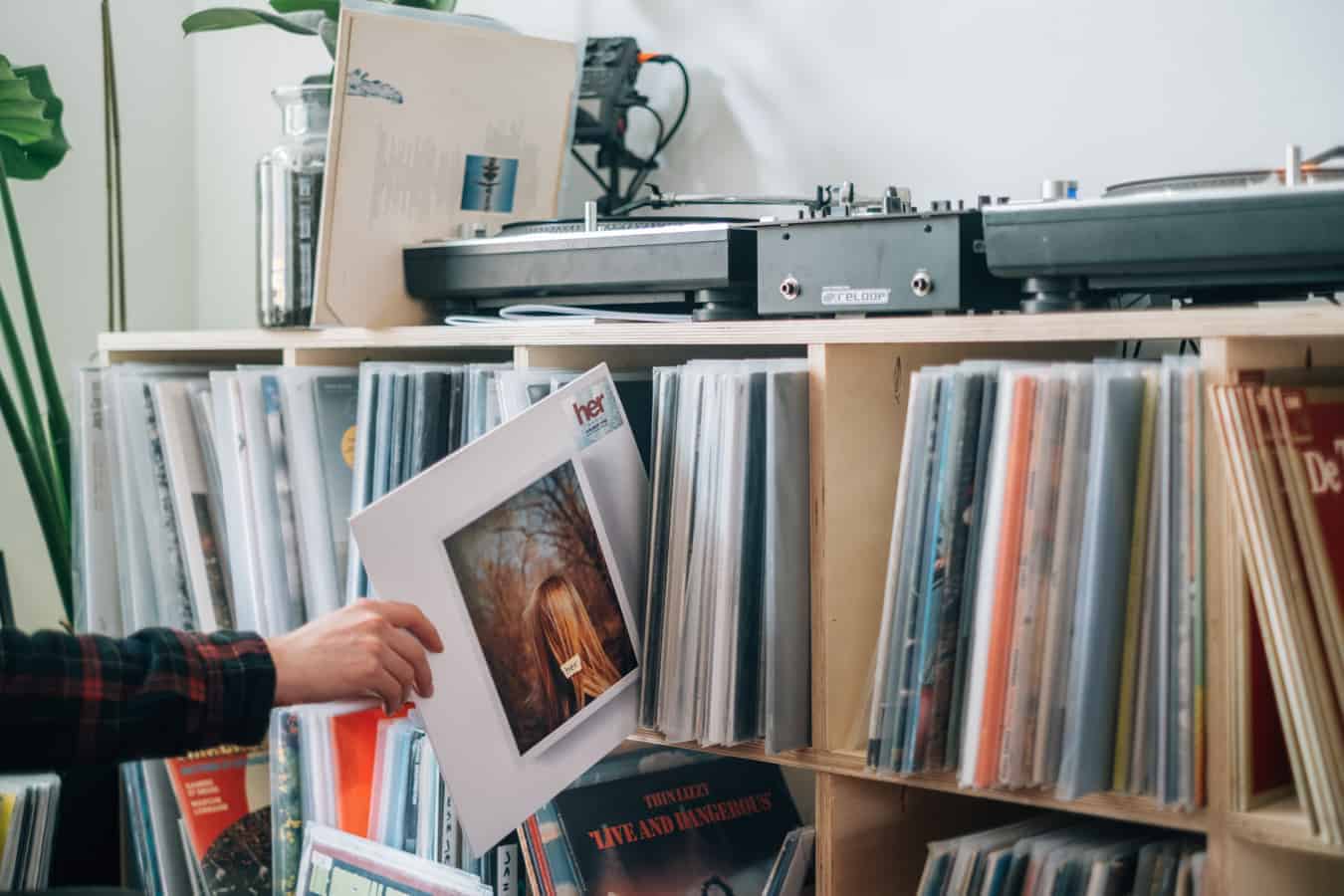 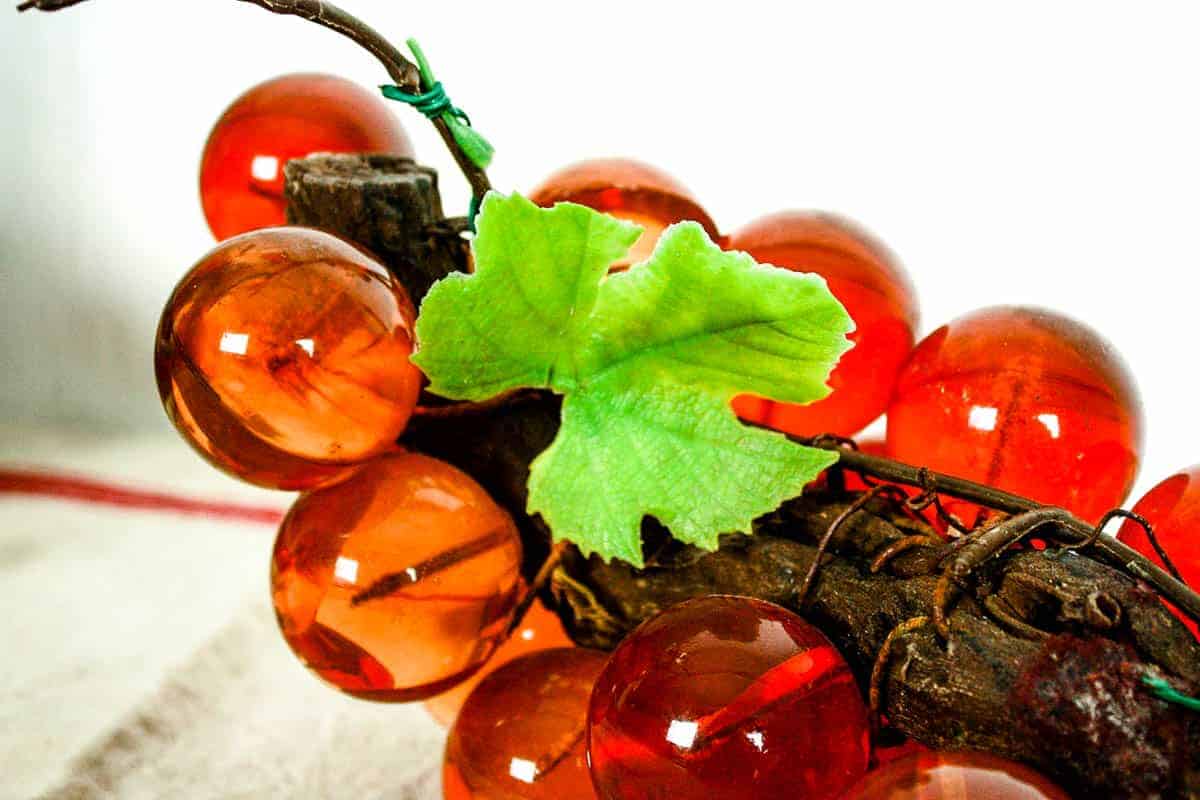 You can go in a lot of directions with rugs and still be considered Mid Century Modern. Of course, neutral, solid color shag rugs are a win for Mid Century homes. You could also do a dark, nature inspired rug, like dark green or light blue. Bold and bright geometric shapes in rugs are also common. Or you can use a light colored rug with a geometric shape imprinted in the carpet. 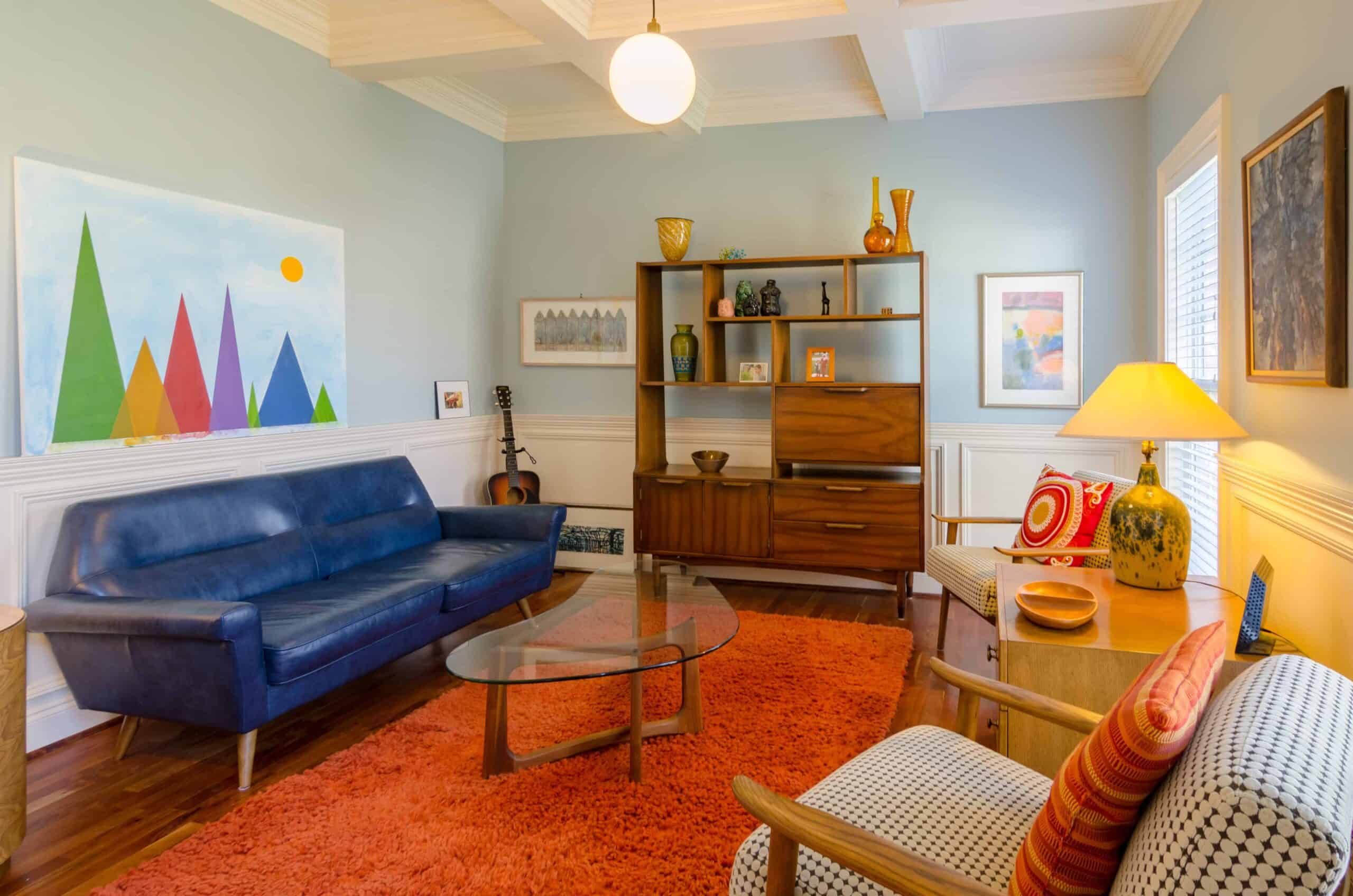 So this is not décor related, but it seems to me that Mid Century décor lovers go beyond the décor. They have a collection of records played on their vintage record player and insist it’s the BEST way to listen to music. Or they have a glass and gold bar cart stocked with vintage barware. Knitting is a favorite pastime. And don’t put it past a Mid Century décor lover to have a couple pieces of vintage clothing or jewelry they pull out pretty regularly.

Comment below and tell me what you’ve added to give your own home Mid Century Modern style!

Style Series: What is Farmhouse Style? 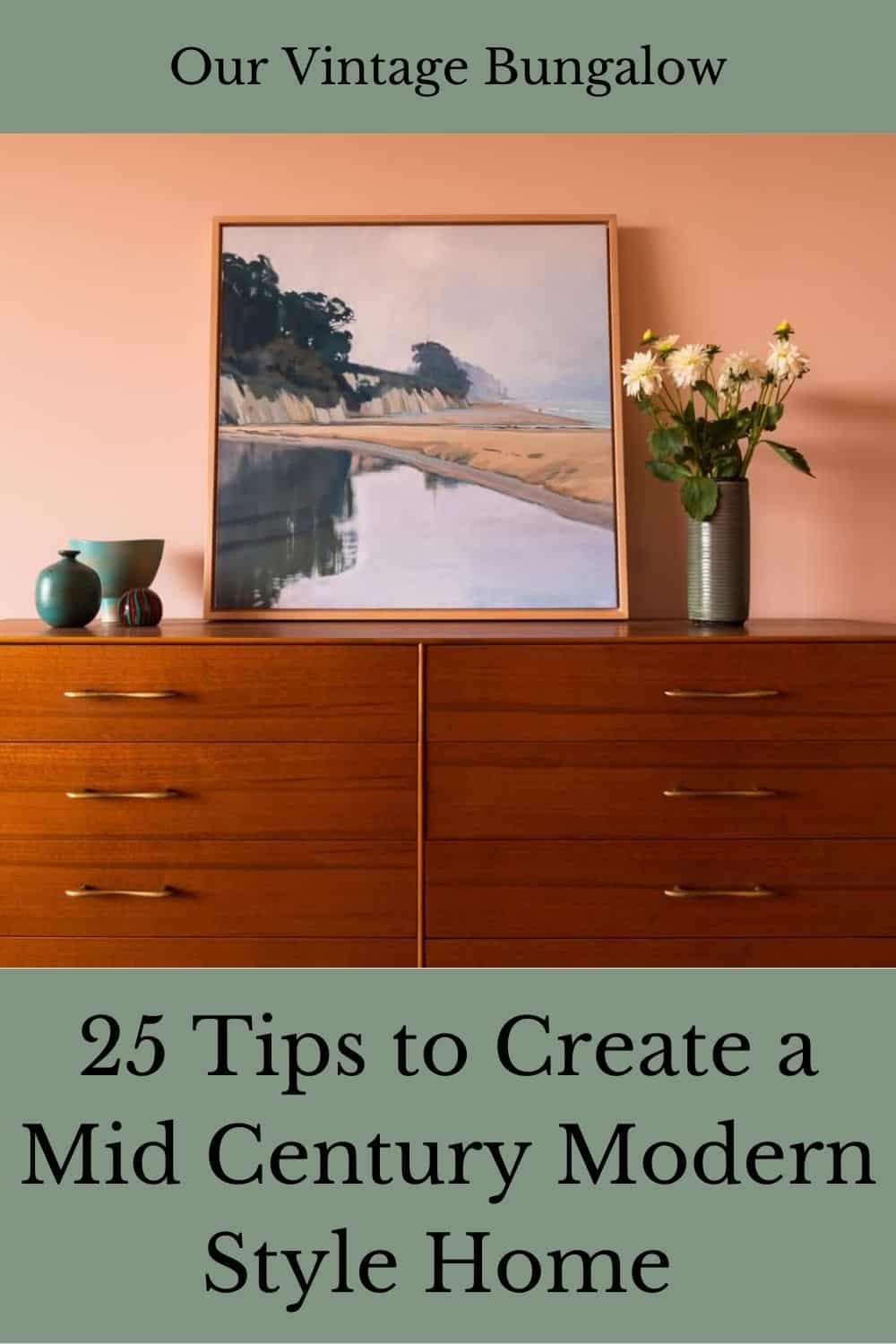 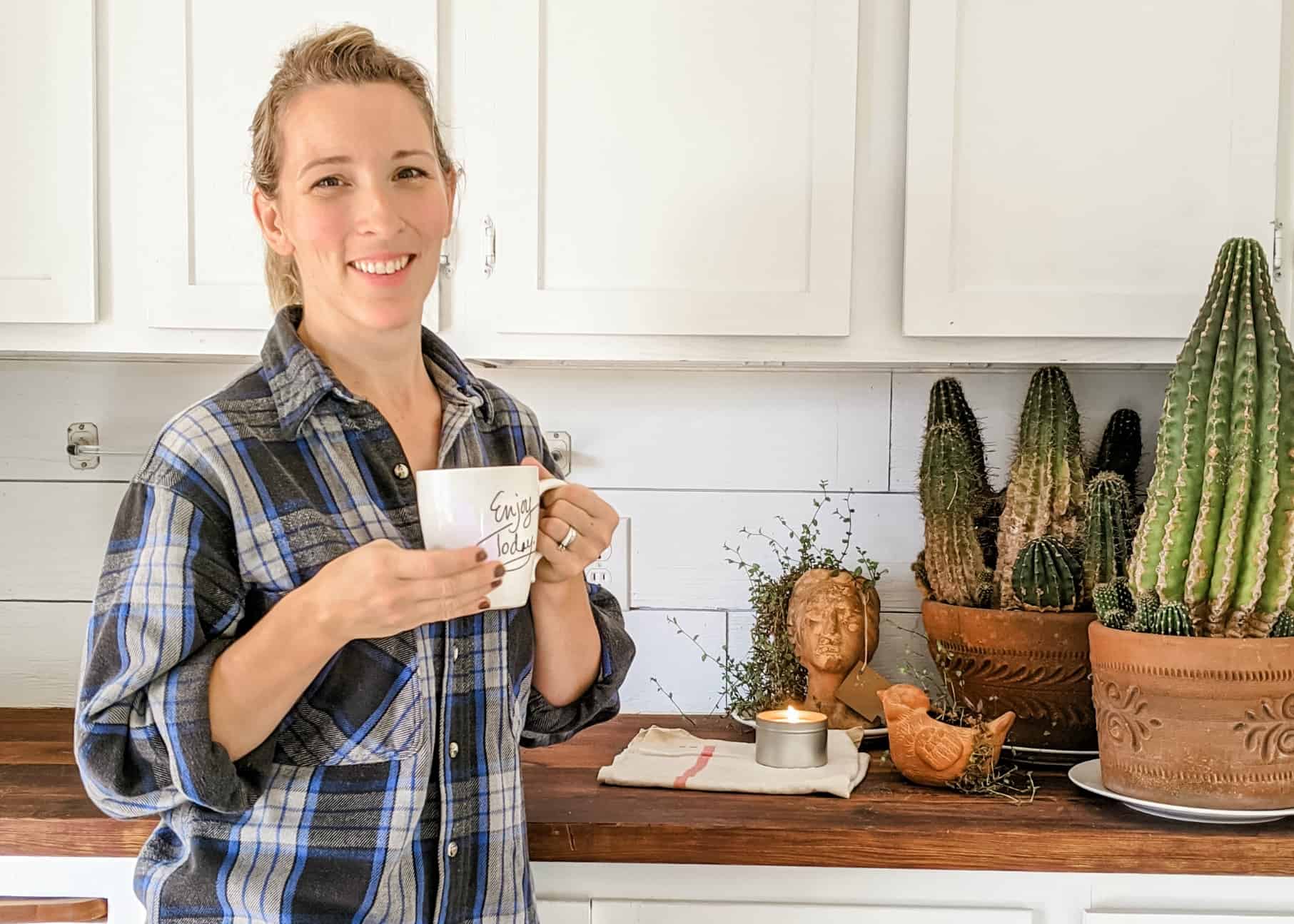 Hey, I’m Tammy, and I’ve lived most of my life in the middle of a reno project.

I am going to give you quick and easy tips of how to decorate & add vintage style that makes a your house feel like a cozy home. I’ll also share the vintage lifestyle (with some modern updates) that I was raised with and continue with my own family.

Inspired to create a home you adore? 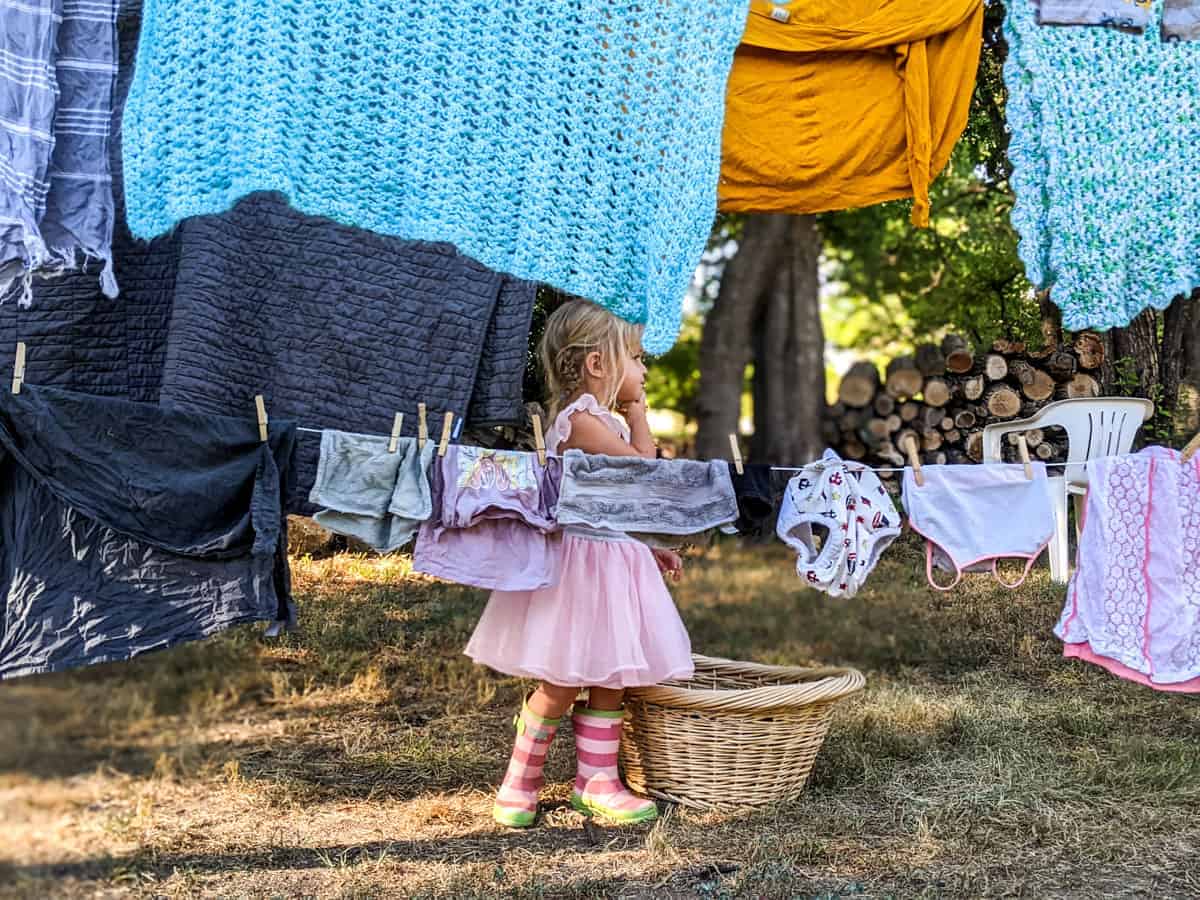 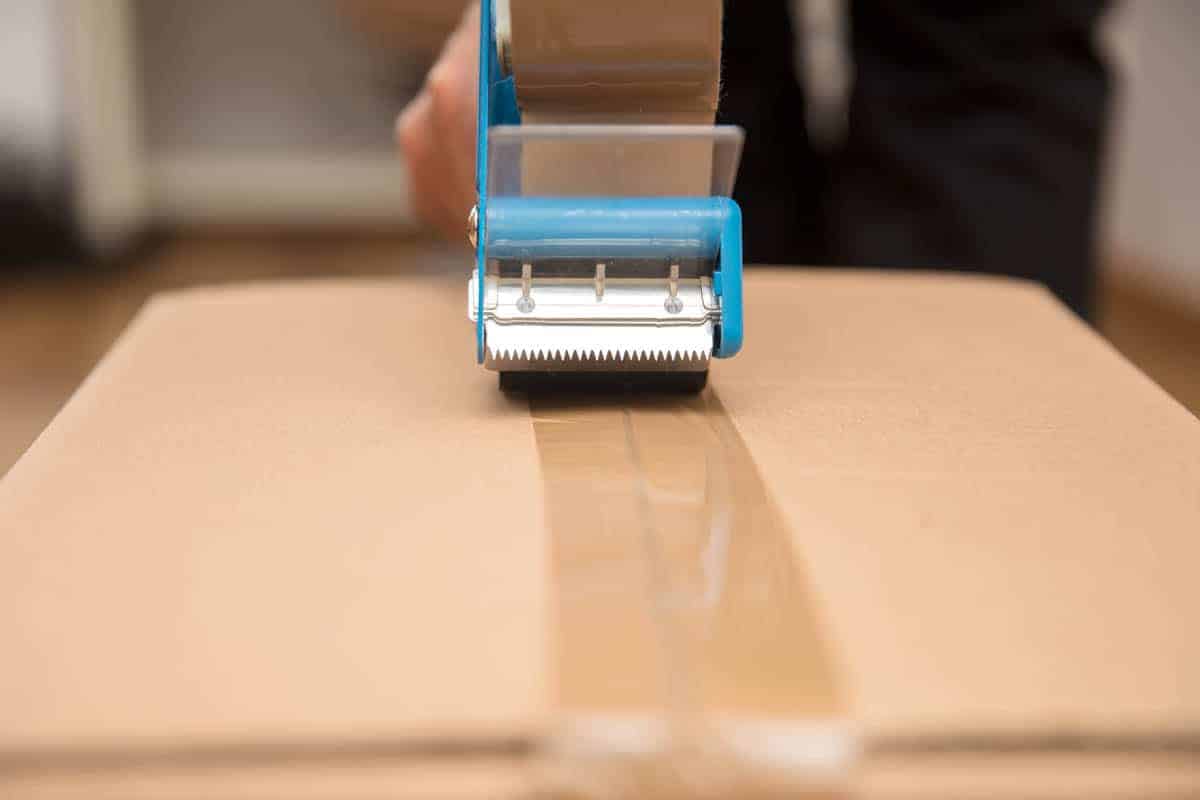 How To Package and Ship Small Vintage Items 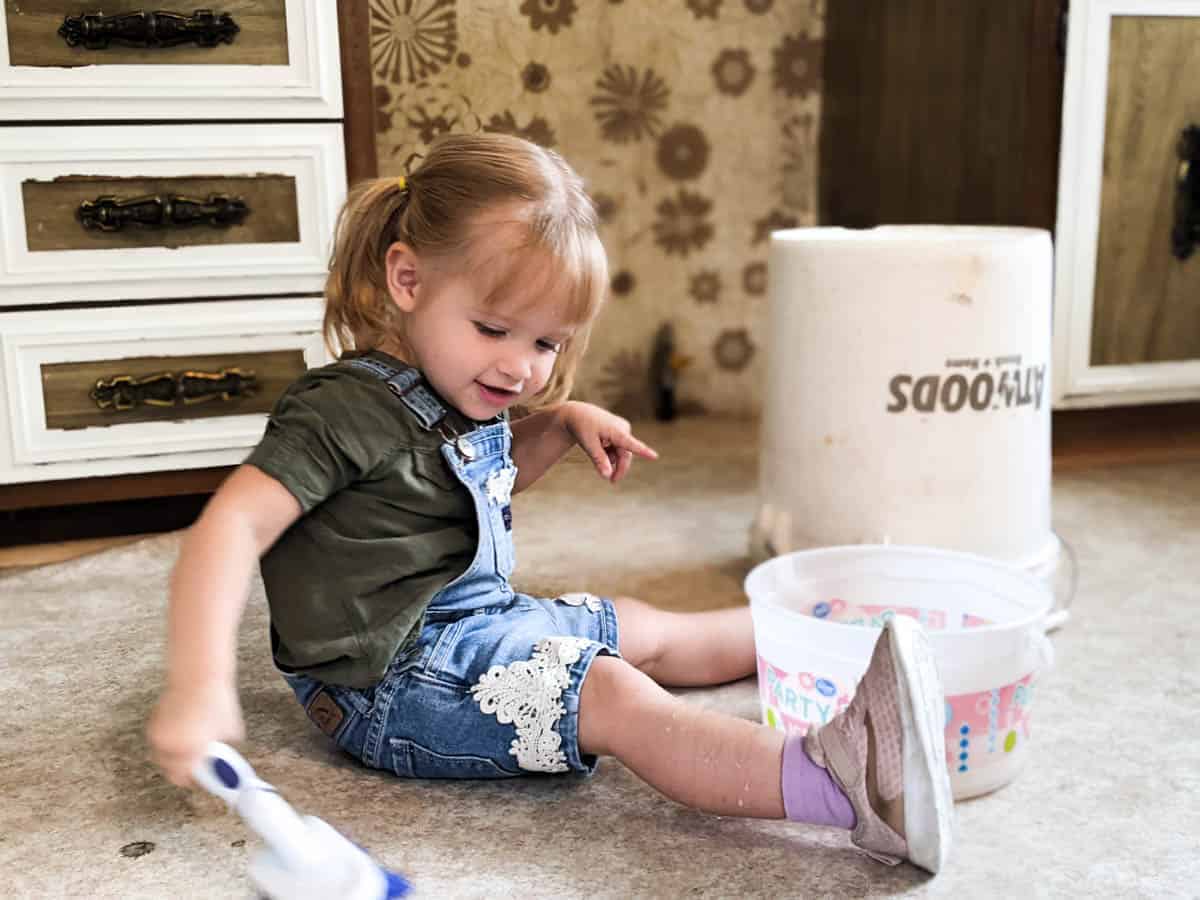 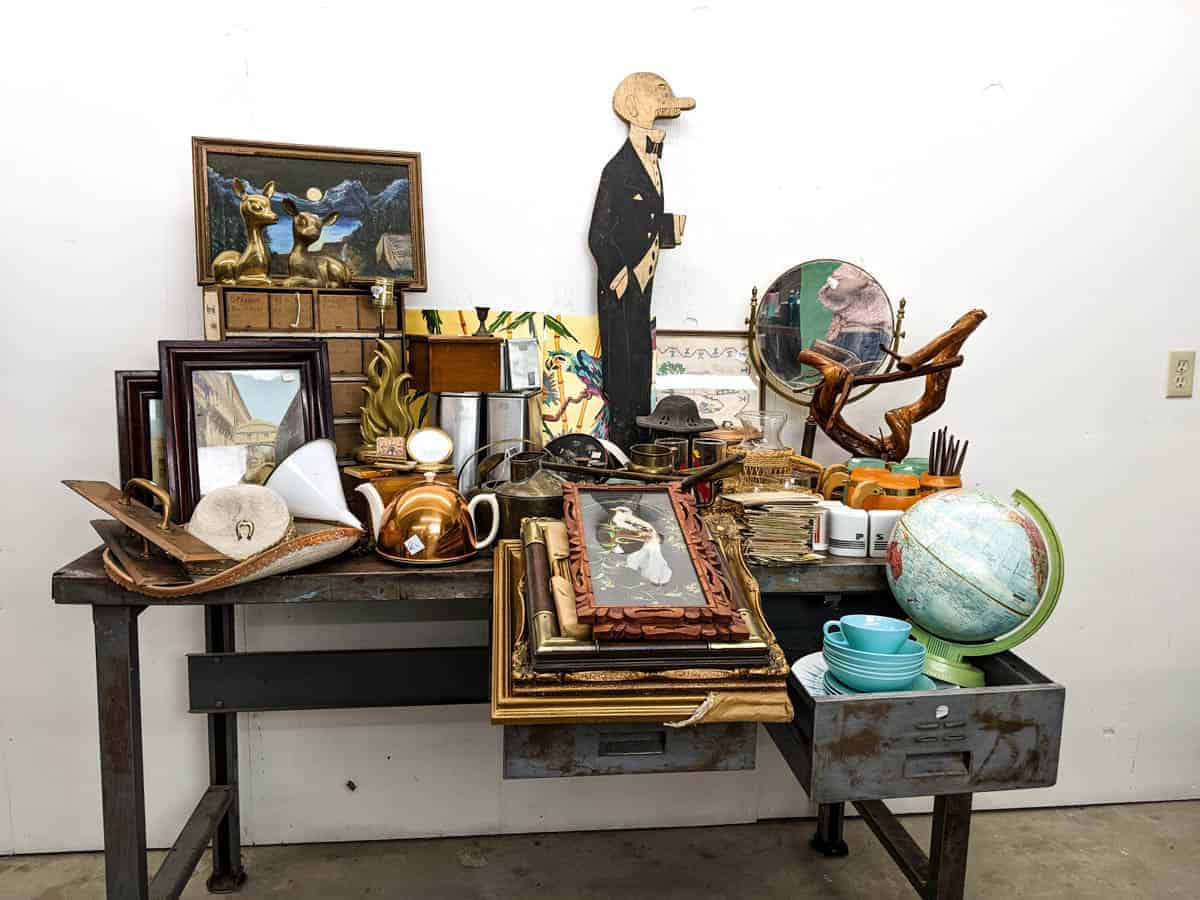 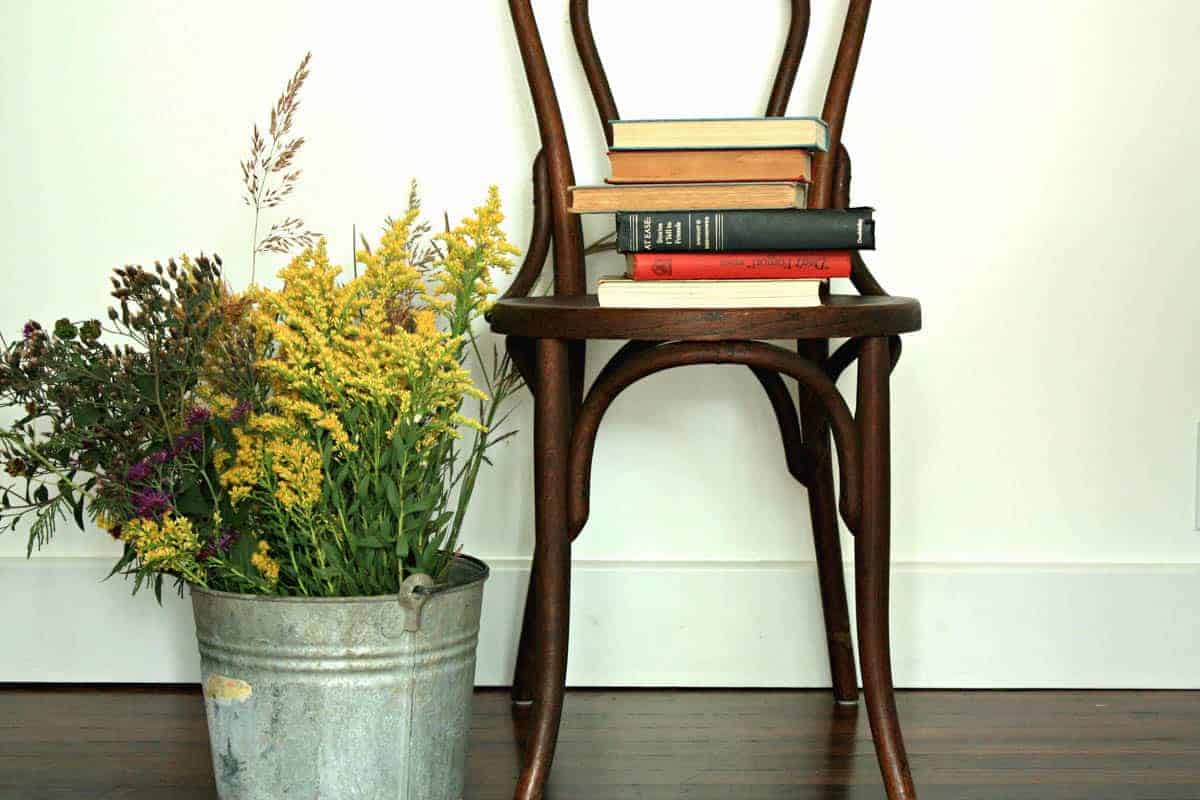 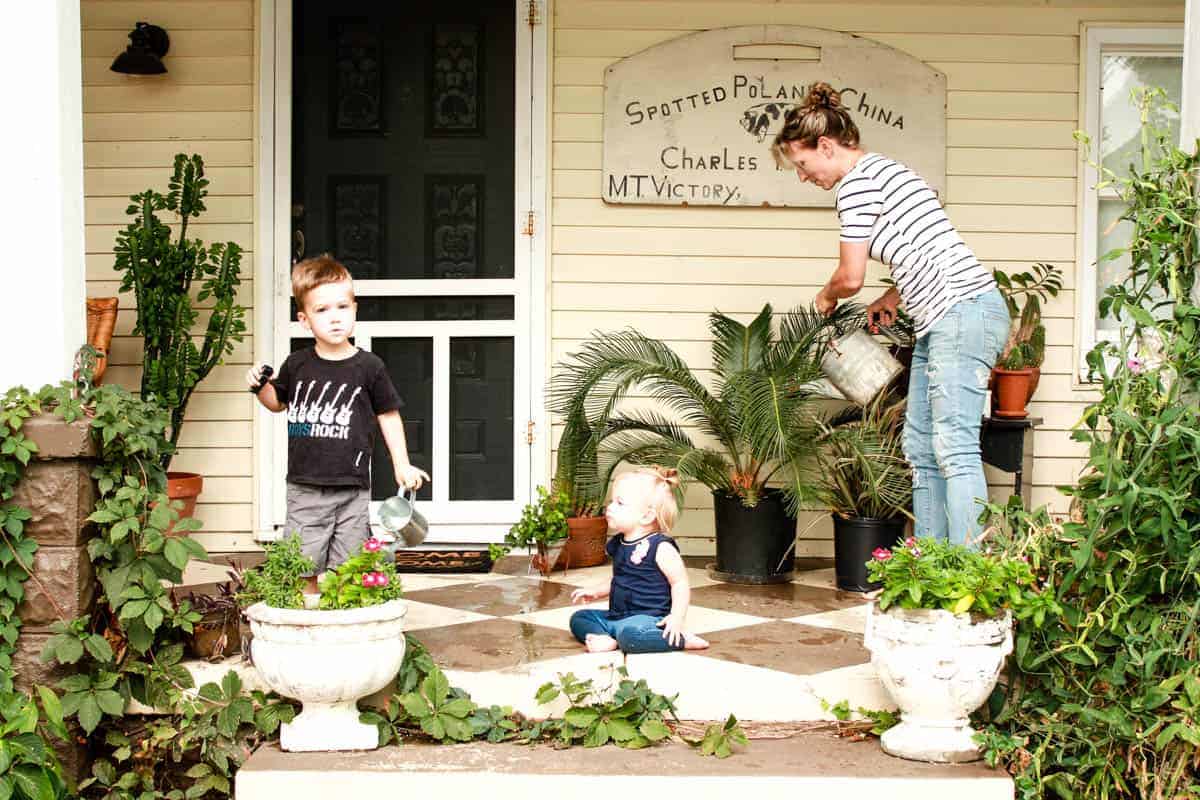 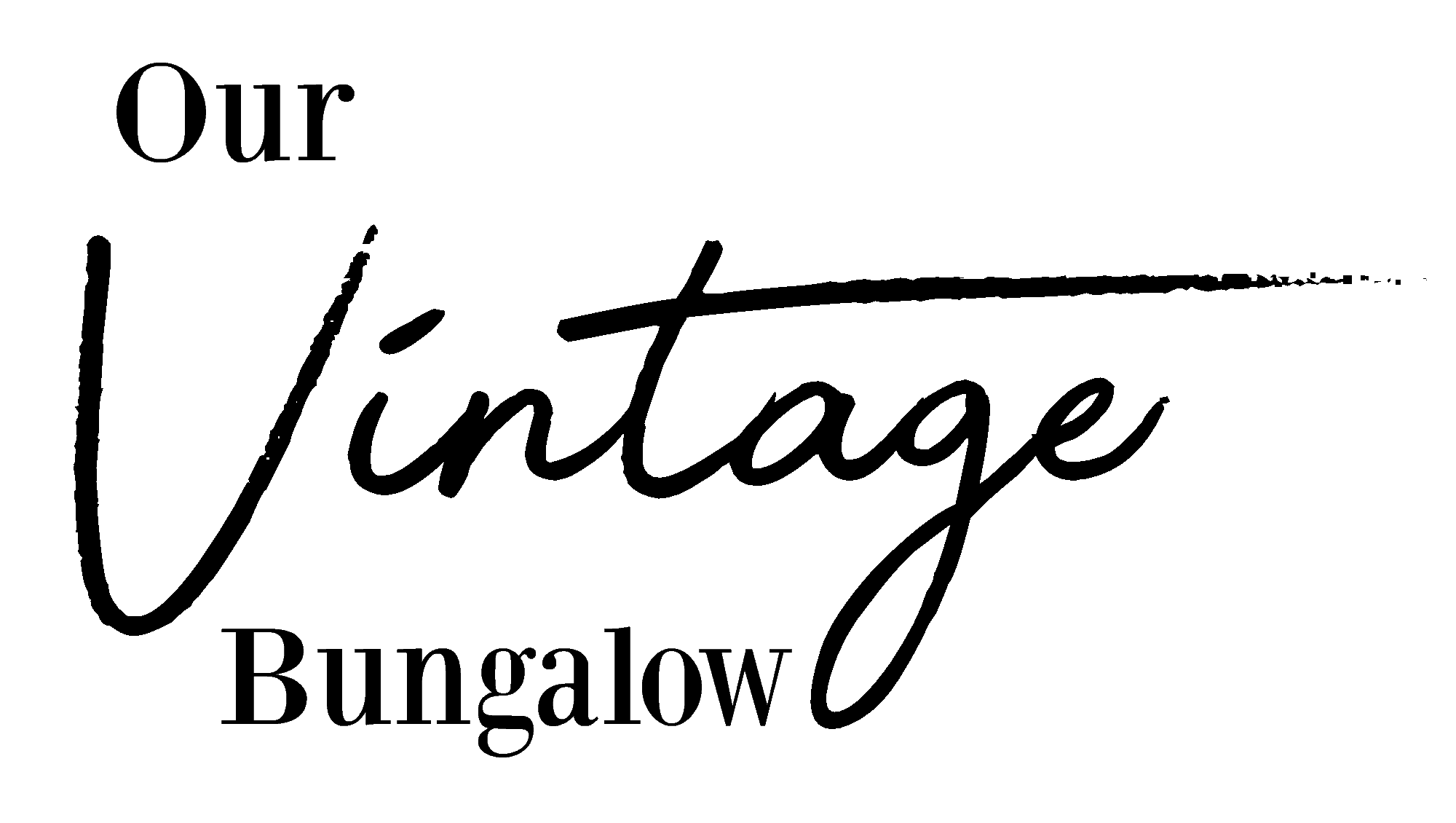 This website uses cookies to improve your experience while you navigate through the website. Out of these cookies, the cookies that are categorized as necessary are stored on your browser as they are essential for the working of basic functionalities of the website. We also use third-party cookies that help us analyze and understand how you use this website. These cookies will be stored in your browser only with your consent. You also have the option to opt-out of these cookies. But opting out of some of these cookies may have an effect on your browsing experience.
Necessary Always Enabled
Necessary cookies are absolutely essential for the website to function properly. This category only includes cookies that ensures basic functionalities and security features of the website. These cookies do not store any personal information.
Non-necessary
Any cookies that may not be particularly necessary for the website to function and is used specifically to collect user personal data via analytics, ads, other embedded contents are termed as non-necessary cookies. It is mandatory to procure user consent prior to running these cookies on your website.
SAVE & ACCEPT
Menu